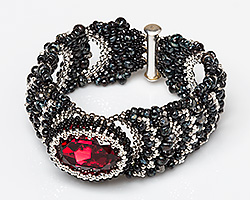 Bellissima means beautiful in Italian. It is the feminine form of the adjective Bella meaning beautiful, but when you add -issima to the end of an adjective in Italian, it intensifies the meaning.

My muse for this project was to make something that was elegant and sophisticated with a large Swarovski stone for visual impact and specific beads for textural effect. The 25x18mm center jewel is made with an open bezel so the color flashes out the sides of the beadwork. Each individual connected arch component is created with odd-count peyote with Pinch-in-the-Ditch and edged with Swarovski crystal beads. The articulated arches flex around your wrist for a comfortable fit. 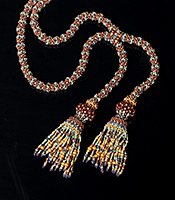 Casablanca is a vibrant, lively and textural necklace reminiscent of a Moroccan marketplace. The bohemian feel of the pendant with fringe adds to the effect. The vessel is formed with structural peyote using a strengthening technique called Pinch-in-the-Ditch and the softly undulating rope is made with alternating netting and peyote stitch. Each color palette is formed from a rectangular tetrad of the color wheel. Students will explore color and texture as well as structural techniques. 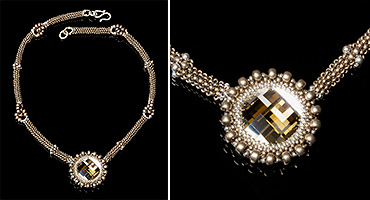 When designing, I like to start with a general sense of the style I want to achieve. I wanted this design to fit with the modern looking Swarovski 30mm foiled Chessboard circle flat back stone.

Various styles of peyote stitch create Contempo with one side sparkly and the backside beaded to look like a mandala. This versatile piece pairs well with a little black dress or a denim jacket. Jointed ropes add hinges while the sides of the stone show an open weave design.

In the style of expensive, fashionable, and hand sewn couture clothing, we are able to create our own high fashion custom accessories with beads, crystals and time invested in attention to detail.

Couture Cuff is a beautifully sophisticated statement piece handcrafted in structural peyote. The structure of the cuff’s channel is stitched with an inventive technique that I developed called Pinch-in-the-Ditch.

The reward of taking time to handcraft the Couture Cuff is a magnificent display of beads and crystals, so comfortable to wear and beautiful to behold on the wrist. 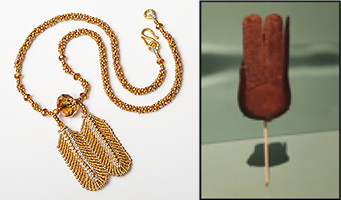 Hathor was the daughter of Ra and the patron goddess of women, love, beauty, pleasure, and music. She was depicted in three forms: as a cow, as a woman with the ears of a cow, and as a woman wearing the headdress of a cow’s horns over a disc with falcon feathers. In this last manifestation, she holds the solar disc between her horns.

In designing this necklace, I have taken artistic license and used an 18mm Swarovski #5041 crystal with a large 2mm polished center-hole as the sun with the falcon feathers descending below it. The large-hole crystal allows for 8/0 seed beads to be strung within adding an additional color layer. The embellished rope of Chenille represents the cow horns.

Fragment of a Queen’s crown
This wood fragment above right (ca 1550-1076 BC) from the Museum Egizio in Turin, Italy would have decorated the top of a queen’s statuette. It is composed of a solar disc resting between a pair of curved cow horns topped with two falcon feathers. It symbolizes that the queen was the embodiment of the goddess Hathor.

Native Americans have a deep connection to feathers. When a feather falls to earth, they believe it carries all of the energy of its former attachment on a bird to a living being. Feathers are perceived as gifts from the sky, the sea and the trees. Feathers arrive unexpectedly, but not without purpose as they are inextricably tied to the belief that birds, as spirit guides, walk through different stages of life with a person, teaching and guiding them, and in some instances protecting them.

My friend Betcey Ventrella was my muse for this piece. I have never used a person as a creative direction, but Betcey embodies a unique connection to Planet Bead that I wanted to embrace. The meaning of her name represents “compassion, creativity, reliability, generosity, loyalty and a love. They have a love for the arts and beautiful aesthetics as well as a deep inner desire for travel and adventure. They want to set their own pace in life without being governed by tradition.”

My Feathers necklace is made with circular peyote creating a unique open sided bezel for the Swarovski stones in the pendant portion and tubular Chenille stitch for the rope. The fringed feathers will help the students understand the inherent issues with flat peyote regarding twists and curling. 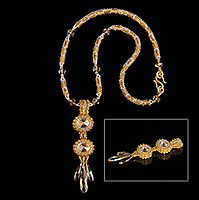 Fifth Avenue is created in my current theme of ‘high sophistication.’ I love making designs that have the feel and look of fine jewelry. With peyote stitch and my new technique variation called Pinch-in-the-Ditch I created a thick, structural bezel around the new Swarovski Oval Rivoli stones. The pendant portion is removable so you can wear this classy two-drop peyote rope by itself.  I have an optional second rope that can be worn in addition to the single rope for added impact. A Fifth Avenue ring is included in the project. 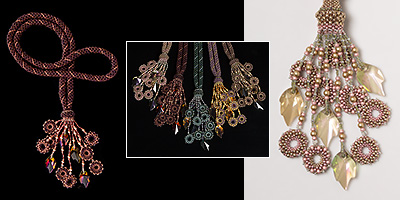 A long, swinging pendant with lots of pizzazz in the fringe, Four Seasons further explores my Pinch-in-the-Ditch technique. This exploration allows for increased structural ability and strength that creates a strong, hollow barrel of structural peyote supporting twelve strands of beaded rings and Swarovski leaf pendants. A continuous organic rope of four-loop netting blends seamlessly into the top of the barrel. 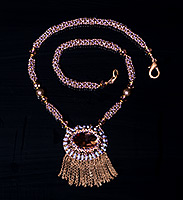 Alice Frances is made in the Victorian spirit of my great-grandmother Alice Frances Phillips Osborne – 1876-1968. I have used circular peyote with a layering technique I developed called Pinch-in-the-Ditch to create a brooch style pendant. This allow a stronger and thicker bezel base for a large 30x18mm Swarovwski stone. Chain drapes from the pendant and suspends from a chenille rope accented with Swarovski crystals and pearls. 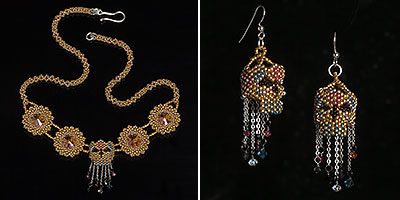 Dia dos Muertos- (Day of the Dead) is a Mexican holiday celebrated throughout Mexico, in particular the Central and South regions, and by people of Mexican ancestry living in other places, especially the United States. It is acknowledged internationally in many other cultures and celebrated in connection with the Catholic holidays of All Saint’s Day and All Hollow’s Day. The multi-day holiday focuses on gatherings of family and friends to pray for and remember friends and family members who have died, and help support their spiritual journey.

La Belleza de los Muertos means ‘Beauty of the Dead.” Beautiful sugar skulls are often used to decorate the gravestones of the deceased and many of the sugar skulls are decorated with flowers meant to symbolize life. The skull symbolizes death but in a positive manner an in Mexico it is believed that death is not the final stage in one’s life but rather a step forward into a higher level of conscience and rebirth.

La Belleza de los Muertos ‘Bella’ is my interpretation of a beaded sugar skull with flower patterns on her and is surrounded by deeply bezeled 14mm Swarovski rivolis. I have used tubular peyote with my Pinch-in-the-Ditch technique for the side flowers and sculptural peyote for the hollow 3D sugar skull. 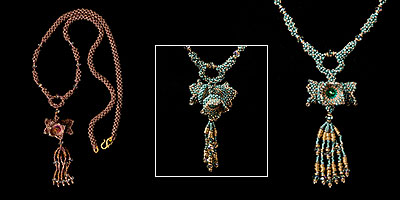 In Italian the meaning of the name Lucia is: Graceful Light. It comes from the Latin word Lux (Light) Lucia is an ancient mythical figure with an abiding role as a bearer of light in the dark Swedish winters. For many, many years Lucia has brought faith, hope, and a reason to believe in good things to come.

My Lucia necklace is a lantern of Swarovski light made in tubular peyote with my Pinch-in-the-Ditch technique. Strands of delicate fringe hang beneath. The long rope is made with classic Chenille stitch. 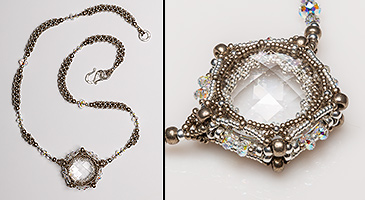 A teleidoscope is a kind of kaleidoscope with a lens and an unobstructed view so it can be used to form kaleidoscopic patterns from objects outside the instrument rather than items installed as part of it.

I was inspired to make Spy Glass by a teleidoscope I had as a child. By using the facets of two Swarovski 30mm Chessboard flat back unfoiled stones you can look at your world perfectly refracted. Decorative and structural peyote beading between the two stones gives it depth and character while serving as the bezel on its edges. Swarovski crystals accent the rope of Chenille stitch. 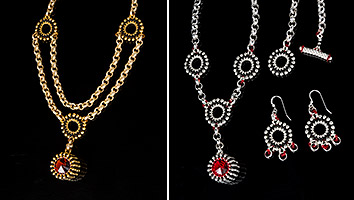 Usually I like to visualize a piece in my mind first and then create it, but this necklace design was born of synchronicity. Synchronicity is a concept which holds that events are meaningful coincidences if they occur with no causal relationship, yet seem to be meaningfully related.

Playing with an 18mm rivoli, the only idea I had in mind as I began was to make something modern. I did not have any specific form ready to translate in beads. Over time I made different parts and pieces here and there while also working on other projects. The necklace began to spontaneously come together one day when I saw the meaningful design connections between the various parts and pieces.

Engineered using Pinch-in-the-Ditch for construction and strength, the center rivoli pendant is an especially significant element as it has no visible external structure. Both designs use the same components and length of chain with an assembly variation to suit your style.